In early 2022 the eyes of the sports world were on the Winter Olympics in China.  At the end of the year they had turned to the FIFA World Cup  in Qatar. Both of these events were quadrennial spectacles featuring the best athletes in the world in their respective sports.  In addition to TV audiences consisting of billions of viewers around the globe, the Winter Olympics and FIFA World Cup had something else in common: the appalling human rights abuses committed by the two host nations. China’s record included  genocide of Uyghurs and other Turkic minorities; arbitrary detention and torture; and the forced labor of millions of workers, many of whom were used to construct venues for the games.  Qatar, like China, used forced labor to build its stadiums, relying primarily on migrant workers whose civil rights are routinely abused. Women’s rights are severely curtailed in the Sheikdom; and openly gay conduct can result in imprisonment.

In Qatar there’s the added ignominy that billions of dollars in bribes were paid in an attempt to cover up its record of human rights violations and allow it to host The World Cup.  Also embarrassing was the way Qatar reneged on its agreement with  both FIFA and a major sponsor of The World Cup 48 hours prior to the first match.  As some alert readers (ARs) know from previous columns, I do not often come to the defense of InBev, Anheuser-Busch or Budweiser. Nevertheless, journalistic integrity compels me to say, there’s no other way to describe it.  Budweiser got double-crossed by Qatar.  Most ARs who are soccer fans probably know that Budweiser has been a World Cup sponsor since 1985, six years before Schlafly was founded and 23 years before Anheuser-Busch was acquired by InBev.  Back in 2010, two years after the InBev acquisition, Qatar was awarded the right to host the 2022 World Cup, prevailing over bids from the United States, South Korea, Japan and Australia. While the billions of dollars in bribes certainly were a factor in this decision,  what was also important was Qatar’s commitment to FIFA and to Budweiser to respect the longstanding terms of sponsorship and allow Budweiser to be sold at World Cup matches.

Twelve years later, with the matches about to begin, Qatar suddenly came to the realization  that Sharia law compelled it to break its agreement to allow the sale of beer in the stadiums.  Apparently the Qatari interpretation of the Quran saw no problem with slave labor or other hideous human rights abuses; nor with paying billions of dollars in bribes to corrupt officials to secure the right to host the World Cup; nor with brazenly violating a contract with FIFA and a major sponsor.  But, allowing soccer fans to quench their thirst with beer in the desert heat?  That would be egregiously immoral.  Except of course in the VIP, VVIP and super VVVIP suites in the stadiums, where beer and other alcoholic beverages were allowed to flow freely. (In case any ARs were wondering, the Muslim word for hypocrisy is Nifaq.) 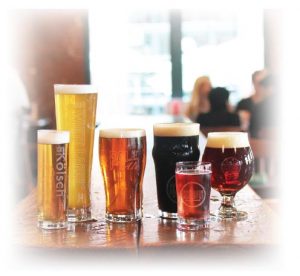 Why St. Louis SC games are better than World Cup matches in Qatar.

Sam Bankman-Fried (SBF) was born on March 6, 1992, making him younger than The Schlafly Tap Room, which opened in December, 1991.  I suspect that some ARs of a certain age, like me, may have been initially perplexed by media references to  SBF. Having grown up in St. Louis, I always thought SBF referred to Stix, Baer & Fuller, a local department store that was acquired by Dillard’s in 1984, the year before Budweiser became a World Cup sponsor.

I freely admit that I have no understanding of cryptocurrencies or the exchanges on which they’re traded; or how exactly SBF amassed a fortune that reportedly peaked at $26 billion and then lost it all overnight; or why gullible individuals allowed SBF to bilk them out of their life savings.   I can, however, understand the fact SBF gave over $70 million of these stolen funds  to various politicians.

To put this figure in context, it’s considerably less than the bribes that were paid to bring the 2022 World Cup to Qatar.  It’s closer to what Budweiser paid as a sponsor.  The motivation for SBF’s gifts is a little murkier. With the World Cup bribes and the Budweiser sponsorship there was a clear quid pro quo. The former purchased the right to host the tournament.  The latter purchased rights to signage and the right to serve beer at matches (whoops).  What exactly did SBF get or expect to get in exchange for the millions he gave to politicians?

The politicians who were the beneficiaries of this largesse would of course answer indignantly that they neither gave nor promised anything in return for SBF’s generosity.  No enhanced access.  No favors of any kind.  Nada.  Zip.  That’s what politicians always say.  Big donations do not buy influence.  Suppose we take the politicians at their word. If it’s really true that they did nothing to earn the money, why don’t they give it back?   How can they justify hanging onto money that they claim was unearned on their part, on which they paid no taxes,  and they now know was stolen from innocent investors?  My guess is there will be a ten foot blizzard in Qatar before this $70 million in unearned, tax free money is returned to SBF’s victims from whom it was stolen.

With the MLS season almost upon us, it’s worth reminding ARs that beer will be readily available at CITYPARK Stadium.  Not just in the elite, exclusive VIP suites, as in the stadiums in Qatar, but throughout the stadium to all fans age 21 and over.  And, unlike Qatar,  fans won’t have to search all over town before or after games to find the few beer oases in the Doha Desert. The Schlafly Tap Room is just across Olive Street.

Finally, fans can enjoy games at CITYPARK with clear consciences when it comes to human rights. Unlike the  Olympic venues in China or the stadiums in Qatar, it was not built by forced labor.  The workforce that built the stadium consisted of conscientious, motivated and highly skilled men and women who often ate at The Tap Room and enjoyed a beer after getting off work.