On November 13, 1789 Benjamin Franklin famously wrote, “Our new Constitution is now established, everything seems to promise it will be durable; but, in this world nothing is certain except death and taxes.”  Two and one third centuries later this statement is as true as when it was first written.

A recent death that was  poignant for me was that of Dan “Buford” Mueller, whom some alert readers (ARs) may not know. He was a regular customer at The Schlafly Tap Room, a longtime employee of Anheuser-Busch and an accomplished home brewer. He was a rugged outdoorsman who had played competitive football and rugby in his youth.  But, as strong as he was, his cancer was stronger.  After a two year battle with the disease, he finally succumbed on November 5th.  In the notoriously small world of St. Louis he had gone to high school with Paul Jensen, who has worked at The Tap Room since we first opened in 1991.  Buford’s sense of humor was effortless and infectious, and I’m one of many who will miss his nonstop torrent of stories and jokes.  The fact that he was 15 years younger than I am makes his passing especially hard to accept.

The reality of taxes is as unavoidable now as it was in Franklin’s time; and the scope of taxation has expanded way beyond anything contemplated by Franklin or the other framers of his beloved Constitution.  For example, the federal income tax, a huge drain on the pocketbooks of tens of millions of Americans today, was actually forbidden by Article I, Section 9, Clause 4 of the Constitution of which Franklin wrote in 1789.  As a brewery Schlafly now pays not only all of the taxes to which most other businesses are subject but also lots of special taxes imposed by federal, state and local governments only on our industry. 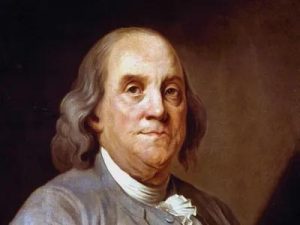 For the record I don’t object to paying most of taxes levied on our business or on me personally.  But I do object to paying a year’s worth of income tax only to have The State of Missouri come back a year later and erroneously claim I had not paid my income tax and, as result, I not only owed the tax in question but also interest and penalties.  I am not making this up.  In 2021 I paid all of my quarterly income tax estimates on time.  In fact I overpaid. I dutifully wrote my social security number on each check and sent it in with a voucher specifying what the payment was for.  The State deposited these checks and presumably spent the money on something.  One year later the State claimed it had never received the checks it had cashed.

Can any ARs imagine a business that behaved like this?  A bank that collected a year’s worth of mortgage payments and then wanted to repossess the borrower’s house?  Imagine the reaction of a taxing authority if an individual deposited a year’s worth of paychecks and then tried to argue that he or she had never received them.   In any case, I was finally able to send the State of Missouri images of both sides of the checks with which I had paid my taxes on time and which the State had deposited.  My only concern is that the same people who claim they never got the checks in the first place might also claim they never received the proof they had received and deposited them.

As some more senior ARs may recall, 17 years ago Schlafly was one of about 100 breweries nationwide (including Anheuser-Busch, which was American-owned at the time) that celebrated Benjamin Franklin’s 300th birthday on January 17, 2006 by brewing their respective versions of Poor Richard’s Ale.  These contemporaneous celebrations usually featured  a quotation commonly attributed to Franklin: Beer is living proof that God loves us and wants us to be happy. This is a most ennobling sentiment.  The only problem is that Franklin probably never wrote it.

As was later reported by a scholar at Suffolk University, Franklin preferred wine to beer; and what he actually wrote to a friend in France in 1779 was: Behold the rain, which descends from heaven upon our vineyards, and incorporates itself with the grapes to be changed into wine; a constant proof that God loves us and loves to see us happy.  So, a lot of people in the beer community got it wrong over the years, including Anheuser-Busch, which included the erroneous quotation in a press release touting its version of Poor Richard’s Ale in January of 2006.

This is one of the many stories I would have loved to share with Buford Mueller over a glass of beer if he were still with us.