Some alert readers (ARs) may recall that I have on two previous occasions written in this space about the Golden Lane of supporters of women’s suffrage who lined Locust Street during the 1916 Democratic Convention in St. Louis.  What I did not realize when I wrote either of these columns was that something else of historic importance happened on Locust Street three years later. From May 8-10, 1919 The St. Louis Caucus of The American Legion was held at The Shubert Theatre on the corner of Locust and what is now Tucker Boulevard.  It was at this site, generally viewed as the birthplace of The American Legion in America, where the organization’s constitution and preamble were drafted and formally adopted.  Four months later, on September 17, 1919, The Tom Powell Post of The American Legion was organized in St. Louis. As most ARs probably know, the United States military, like much of society at the time, was racially segregated.  What fewer ARs might know is that The Tom Powell Post was the first Black American Legion Post anywhere in the world: and that it was founded in St. Louis.

I was not aware of this important piece of local and national history until July 24th of this year, when I met some current members of The Tom Powell Post at The Missouri History Museum. I was there in my capacity as the chair of  the St. Louis Chapter of The Explorers Club, an organization about which I’ve written in the past.  (ARs who would like to learn more can visit www.explorers.org. )  I was honored to speak at a ceremony recognizing  Erick Cedeno, self-described Bicycle Nomad and fellow member of the Explorers Club, who had just completed a 1,900 mile  bicycle ride from Missoula, Montana to St. Louis.  As impressive as this feat was, it was a commemoration of an even more remarkable expedition in 1897, the epic ride of The Iron Riders. 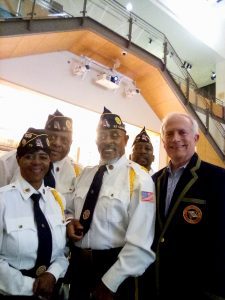 After The Civil War Black enlistees in the U.S. Army who fought on the western frontier were called Buffalo Soldiers.  (The precise origin of the name is unclear. Like some ARs I first heard the phrase in Bob Marley’s song that was recorded in 1978 and released in 1983.) In the late 19th Century the Army became interested in the military potential of bicycles and formed the 25th Infantry Regiment Bicycle Corps with volunteers from among the ranks of the Buffalo Soldiers.  Because these soldiers rode bicycles, as opposed to horses, they got the name Iron Riders.  In order to test the effectiveness of this new form of transportation, the Iron Riders rode their bikes along the same route that Erick retraced 125 years later.

Without taking anything away from Erick’s achievement, it’s worth noting some important differences between his ride and the trek of The Iron Riders.  First, there was the equipment.  The state of the art bicycle in the late 19th century  weighed 32 pounds and had a single speed. When full loaded with gear the bikes weighed 60 pounds, a far cry from what’s available for recreational cyclists today.  Second, there was the route that was traveled. In 1897 there were few paved roads or even gravel roads, meaning the riders often had to ride through muddy fields and carry their bikes across streams.  In addition to these challenges the Iron Riders had to contend with the appalling bigotry of some of the communities through which they rode.  Quite appropriately, The Buffalo Soldiers Historical Society and The Tom Powell American Legion Post were among the organizations welcoming Erick Cedeno to St. Louis and celebrating both his ride and that of The Iron Riders 125 years earlier.

In my remarks to the assembled group I noted the history of exploration in St. Louis from the canoes and pirogues used by Lewis and Clark to the early days of space exploration to the NGA, where robotics and artificial intelligence are currently used to explore galaxies billions of light years away.  What distinguished Erick’s trip and the expedition of the Iron Riders from other explorations was that St. Louis was the destination, not the starting point.  It was certainly unusual, if not unprecedented for an explorer, such as Erick, to be welcomed by a local chapter with the official Explorers’ flag upon reaching his destination, not returning from it.

I also made the point that it’s possible to explore without leaving home.  Having served on the Board of The St. Louis Public Library since 1985, I’ve come to appreciate what a resource it is for explorers who aren’t able to travel to outer space or the bottom of the ocean.  In fact I didn’t haven’t have to leave home to discover the fascinating histories of Tom Powell and the Buffalo Soldiers.

ARs who want to explore the world of beer  can also do so without leaving home.  There’s no better time than our 25th annual Hop In The City on Saturday, September 17th next to the marker commemorating the 1916 Golden Lane.  What better way to celebrate the 103rd anniversary of the founding of The Tom Powell American Legion Post?