One of the byproducts of the COVID pandemic has been a phenomenon known as The Great Resignation.  For a variety of reasons tens of millions of workers have left their jobs and declined to seek other employment.  In my humble opinion the greatest resignation of all was that of Britain’s Prince Harry.  As some alert readers (ARs) will recall, Harry and his wife Meghan Markle famously announced that they were “stepping down” from their work as members of the royal family.  The first question some ARs might be inclined to ask is, what exactly is the “work” from which these overworked royals are stepping down? Is dressing up to attend parades and horse races really work?  It doesn’t exactly lead to the same level of stress and burnout as being first responder.  Second, is “stepping down” just a euphemism for saying “I quit”?  In all of my years of working at Schlafly Beer and three different law firms I don’t recall anyone ever quitting by saying, “I’m stepping down from my work as a legal assistant, cook, brewer, bartender etc.”

Even more interesting were the conditions under which Harry and Meghan wanted to step down.  After resigning from their jobs as members of the royal family they moved to the United States and demanded that the British taxpayers, for whom they had formerly worked, pick up the cost of security at their new home across the pond.  Unless I’m missing something, their message boiled down to: “We’re quitting work.  We refuse to live in any of the dozens of castles at our disposal in The United Kingdom.  And the Lord of the Exchequer needs to pay us more for doing less.”

With the recent death of Queen Elizabeth II and the accession of King Charles III, much of the world’s attention has been focused on the UK.  As some ARs may recall, it was in this kingdom, specifically the town of Oxford, where I found the inspiration to start a brewery that brewed English-style ales in St. Louis.  Thirty-nine years later what better way to toast King Charles than with a pale ale that his  kingdom helped inspire?

Ten years later, in 1993, Schlafly Beer was not only up and running but, thanks to a change in Missouri law, we were finally able to sell our beer to other bars and restaurants.  The first establishment to carry Schlafly was Blueberry Hill, in the University City Loop.

I was reminded of this milestone when my wife and I joined Joe Edwards in celebrating the 50th anniversary of his iconic watering hole.  It then dawned on me that Blueberry Hill had reached legal adulthood (21 years of age) when it started serving Schlafly. 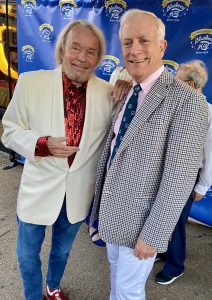 Full disclosure: I was in St. Louis in 1972 and do not remember the opening of Blueberry Hill.  I know that I liked it the first time I went there and on multiple subsequent visits.  But I honestly have no recollection of when that was.

That was also the same year that St. Louis Public Radio first went on the air.  But I have no idea when I first found 90.7 on my FM dial.

One of the most significant local events of 1972 was the establishment of the Zoo Museum District (ZMD).  As ARs of a certain age may recall, this was an historic act of regional cooperation of which St. Louisans can be proud.  Unlike the internecine squabbling that has characterized so much of our history, the residents of St. Louis County and St. Louis City made the decision to pool their resources to fund cultural institutions with free admission for all. While I don’t remember the beginnings of Blueberry Hill and St. Louis Public Radio, I do recall voting to establish the ZMD over a half century ago.

I think most ARs would agree that the most consequential event on the national level in 1972 was the Watergate burglary. It forever changed our lexicon by adding the suffix “gate” to all kinds of words to indicate a serious scandal.  It also led to the first and only resignation of an incumbent U.S. President ever.  At the same time, ARs who were around in 1972 will recall that the burglary itself didn’t get all that much attention in the immediate aftermath. It wasn’t enough to keep Richard Nixon from winning the 1972 presidential election by one of the biggest landslides in history.

Nixon’s historic resignation on August 9, 1974, less than two years after his landslide re-election, should also be considered a great resignation. Like Harry and Meghan he moved to California.  It’s notable that he didn’t move overseas and demand that US taxpayers foot the bill for his foreign security.