One of the perks of office that King Charles III is now able to enjoy is celebrating his birthday twice a year.  As some alert readers (ARs) may recall, his mother, Queen Elizabeth II, who was born on April 21, 1926, traditionally celebrated her official state birthday on the second Saturday in June, when the weather was better. Considering that Charles was born on November 14, 1948, a time of year when English weather can also be inclement,  he will undoubtedly want to continue the tradition observed by his mother.  Some ARs may also know that Charles has selected May 6, the birthday of his grandson Archie, as the date of his coronation, meaning he will have been officially crowned by the time he celebrates his official birthday.

A coronation of more immediate concern to most Americans is that of the World Series champion, which will have occurred by the time Charles celebrates the biological  birthday he was assigned at birth.  While the identity of the World Series champion is not yet known, ARs in St. Louis are painfully aware that it will not be our beloved Cardinals.  Nor will it be The New York Mets, whose star pitcher Max Scherzer is a St. Louis native.

Max, who made his Major League debut in 2008 with the Arizona Diamondbacks,  earned his first and only World Series ring eleven years later in 2019, when he pitched for the Washington Nationals.  By coincidence I was at the game in Nationals Park on October 15, 2019  when the Nationals eliminated the Cardinals. Earlier that day I had been at The White House with The Stanley Cup and other members of The St. Louis Blues organization. One day earlier Cardinals pitching coach Mike Maddux had made golf history by getting two holes in one in one day at the Army-Navy Country Club in Arlington,  VA.  Experts have calculated the odds against such an achievement at 67 million to one.

While ARs from St. Louis surely know that the most significant biographical detail about Max is where he went to high school (Parkway Central), even the most alert are probably not aware that his grandfather spent most of his working career in the building that is now the home of The Schlafly Tap Room.  I am not making this up. 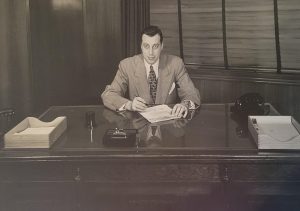 As can be confirmed by looking at the former entrance to our building at 2100 Locust Street, it used to be the home of John S. Swift Printing Company.  Shortly after we opened for business in 1991 someone from Swift, whose name I don’t recall, generously gave us some archival photographs.  Several years later a former Swift employee who was at The Tap Room pointed to one of these photographs and casually said, “That’s Max Scherzer’s grandfather, who worked here over 50 years.”  Unfortunately, I did not make a note of the photograph to which he was referring.  Several years later, last August to be precise,  I was honored to host Mike Maddux and his wife Lise at The Tap Room (yes, two holes in one in one day Mike) and told them the story.  They tentatively identified a man in one particular photo as looking like Max, but we have not yet confirmed that this was in fact Max’s grandfather.

What I have been able to confirm is that Max’s grandfather Melvyn Scherzer worked for Swift Printing for 53 years and was the Vice President of Sales.  He was active in the Moolah Shriners and a 33rd degree Mason. He died at the age of 77 in 1992, one year after the opening of The Schlafly Tap Room, when his grandson Max was eight years old.  I have no way of knowing if Melvyn ever came back to his former workplace for a beer while he was alive.

We would of course be tremendously honored if Max or anyone from his family wanted to visit the place where his grandfather had such a long career and see how it has been transformed in 31 years of Schlafly ownership.  We would also be honored if King Charles were to come back to St. Louis for the first time since October 21, 1977, when I met him in front of the Old Courthouse near the Arch.  Charles is of course  welcome anytime, but if he waits until after his coronation, the weather in St. Louis will be nicer, just as in London.  It would be during the MLS season and the soccer games being played across the street from the Tap Room in Centene Stadium would  be familiar to Charles and Camilla,  as would the beer at The Tap Room.   This would also be during the MLB season.  Given that  Charles and Camilla may not be so familiar with the game of baseball,  they might want to take a crash course before they visit by going to one of the games between the Cardinals and Cubs at London Stadium on June 24th  and 25th.  If they then decide to see the St. Louis Cardinals at home they would do so in the only Major League city named for a European king.