My last year of law school (1976-1977) marked the beginning of a great divide in presidential politics.  This was the last time a Republican President was a lawyer; and also the last time the nation elected a Democratic President who was not a lawyer.  The term of Gerald Ford, a lawyer who was never elected as either President or Vice President, expired in January of 1977.  He had been defeated in the November, 1976 election  by Jimmy Carter, who was not a lawyer.  Ever since my graduation from law school in May, 1977,  no lawyer has been elected President of the United States on the Republican ticket.  And every Democrat who has been elected either President or Vice President since then has been a lawyer.

As most alert readers (ARs) undoubtedly know, all of these individuals, lawyers or not, took an oath to support and defend the Constitution of the United States.  What some ARs may not recall from their high school civics classes is that many historians trace the origins of our Constitution to the Mayflower Compact of 1620.  This was the governing document of the Plymouth Colony and is the first constitution known to have been written in North America.  It has subsequently been praised for establishing the basis for self-government in the English colonies and later in the United States.

Despite these lofty ideals, not all of the ensuing jurisprudence near Massachusetts Bay was particularly edifying by contemporary standards.  Most ARs are aware of the Salem Witch Trials of 1692 and 1693, which resulted in the deaths by hanging of fourteen women and five men.  One additional man was pressed to death for refusing to confess.  Perhaps not as many ARs are familiar with Merrymount, a settlement not far from Plymouth that attracted the ire of the Puritans with a Maypole celebration on May 1, 1627.  As described by Thomas Morton, the lawyer who had founded Merrymount:

The inhabitants of Merrymount…did devise amongst themselves to have…Revels, and merriment after  the old English custom…& therefore brewed a barrel of excellent beer, & provided a case of bottles to be spent, with  other good cheer, for all comers of that day.  And upon Mayday they brought the Maypole to the place appointed, with drums, guns, pistols, and other fitting instruments, for that purpose. 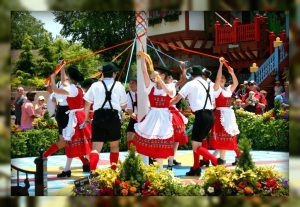 The Pilgrims did not approve.

The festivities around the Maypole, which was constructed from an 80-foot pine tree, were met with horrified disapproval on the part of Governor William Bradford.  When a second Maypole celebration was held, Bradford dispatched an armed party under the command of Myles Standish to put an end to “the beastly practices of ye mad Bacchanalians.”   Standish’s men tore down the Maypole and hauled Morton off in chains.  According to Bradford, the celebrants at Merrymount had drunk so much that they offered little resistance.

Fifteen years after the first Maypole, a teenaged servant named Thomas Granger got caught up in Governor Bradford’s criminal justice system in Plymouth Colony.  As Bradford wrote about Granger in 1642,

He was this year detected of buggery, and indicted for the same, with a mare, a cow, two goats, five sheep, two calves, and a turkey.  Horrible it is to mention, but the truth of history requires it.

As punishment for their complicity in Granger’s bestiality the animals were executed in front of him before the authorities executed Granger himself.

Years before Bradford’s clampdown on Maypoles and bestiality, he had been outraged by a game of “stoolball” on Christmas Day, 1621.  His indignation was two-fold. First, the ballplayers were frolicking while the Pilgrims, who did not observe Christmas, where working in the fields.  Second, stoolball games brought the sexes together, often at Easter, with open flirtation and other dangerous interaction. In The Two Noble Kinsmen,  a comedy co-written by William Shakespeare and John Fletcher, the phrase “playing stool ball” is used as a euphemism for sexual activity. Within this context, it’s no surprise that  Bradford responded by banning the game and confiscating the “implements.”

Although the connection is a bit murky, there’s reason to believe that stoolball evolved into cricket, which in turn evolved into baseball. Whether baseball is in fact related to stoolball or not, there’s no doubt that it’s now far more socially acceptable in America than the predecessor game was in Plymouth, with millions of fans now filling large stadia around the country every year.

One of these stadia is Nationals Park in Washington, DC, the home of the third Major League Baseball team in the nation’s capital in my lifetime. Among its many amenities is proximity to establishments that sell Schlafly Beer.  In addition to serving as the venue for a variety of sporting events, on Monday, May 24th Nats Park will host the commencement exercises for Georgetown University.  The facility was chosen to accommodate the social-distancing requirements of COVID, and I suspect the Law School class of 2021 will have a more memorable graduation than I did 44 years ago.  Perhaps some of them will help overcome the divide in presidential politics that began back when I was in their shoes.