A little over 100 years ago Sinclair Lewis published his highly acclaimed novel Main Street.  As some alert readers (ARs) will recall, it was a satirical critique of small-minded capitalism and materialism in the fictional small town of Gopher Prairie, Minnesota.  Four decades later Neil Sedaka released his hit single “Next Door to an Angel” with the memorable stanza:

Saw her walkin’ down Main Street
And I couldn’t believe my eyes.
It used to be such a plain street
But now it’s paradise.

I mention this because it was only recently that I realized Schlafly was part of Main Street both literally and figuratively.  Not only are two of our locations actually on Main Street.  Both are in the 900 blocks of their respective streets.  Schlafly Bankside is at 920 South Main Street in Historic Downtown St. Charles; and Schlafly Highland Square is at 907 Main Street on the town square in Highland. For some reason this coincidence of addresses never dawned on me until a few weeks ago.

I was also unaware of the National Main Street Center, whose mission is “leading a movement committed to strengthening communities through preservation-based economic development in older and historic downtowns and neighborhood commercial districts.”  To that end it sponsors a program called Main Street America, which “revitalizes older and historic commercial districts to build vibrant neighborhoods and thriving economies.” 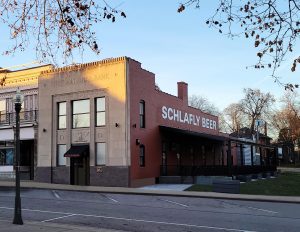 In other words, Sinclair Lewis and Neil Sedaka notwithstanding, lots of good things are happening both on Main Street and in the name of Main Street.  When we started Schlafly Beer over 30 years ago, our primary mission was nothing more than brewing superior beer and offering it to our clientele.  The fact that we also fulfilled the mission of the National Main Street Center has been a rewarding byproduct.  While the adaptive reuse of old buildings was not necessarily part of our plan, it turned out that every one of our four locations is in a building originally used for something other than brewing beer.  Two of the four buildings had been vacant for years when we bought them.

The building where The Tap Room is  located had been a printing company for many years.  The area around it had been devastated by two massive fires and decades of neglect.  Thirty years later,  as most ARs surely know, the neighborhood is now booming, thanks in large part to the new St. Louis SC stadium directly across the street from us.

The building that’s now the home of Bottleworks had been the home of two supermarkets, both of which had moved out years before we bought it.  Our presence has helped anchor the east end of Manchester and Maplewood is now thriving twenty years later.

The building that’s now the home of Bankside had been the home of Trailhead Brewery and was not vacant prior to our taking over the business. Nevertheless, as was the case with our other locations, it had been repurposed from another commercial use.  As early as 1769 there was a mill on the site; and, for all I know, Lewis and Clark bought some blankets and other goods there for their Corps of Discovery Expedition. Just as our presence at the east end of Manchester has been beneficial to Maplewood, Bankside has been an anchor at the south end of Main Street in Historic St. Charles.

The building that’s now the home of Schlafly Highland Square was originally a bank.  The signage is still visible, as is the vault behind our bar. It’s too soon to say what impact our presence in Downtown Highland will have, but there’s every reason to believe it will contribute to the revitalization.

I should add that Highland Square and Bankside aren’t our only locations on Main Streets.  Bottleworks is just off Manchester, which  was part of the original Route 66, commonly known as  The Main Street of America.  As ARs familiar with the iconic song first recorded by Nat King Cole know, Route 66 was over 2,000 miles long.  Going west from Maplewood it passed through Joplin, Oklahoma City, Amarillo, Gallup, Flagstaff, Winona, Kingman, Barstow and San Bernardino before ending up in Los Angeles, slightly north of Inglewood.

Inglewood, as some ARs know, is the home of SoFi Stadium, the $5.5 billion dollar edifice erected as a monument to Stan Kroenke’s colossal ego after he repeatedly lied to millions of St. Louisans and showered us with contempt on his way out of town.

It’s too bad Sinclair Lewis isn’t alive today.  He might conclude that Main Street does not in fact represent the most execrable greed in America.