In 1797 John Adams was the first of eight Harvard graduates to take the oath of office as President of The United States. Twenty-eight years later, in 1825, his son John Quincy Adams was the second.  Of the first seven U.S. presidents the Harvard-educated Adamses were the only two to lose their bids for re-election to second terms.  Alert readers (ARs) can draw their own conclusions.  The electorate’s attitude would appear to be mixed.  On the one hand  voters apparently thought one term was enough for each Adams.  On the other hand subsequent voters later elected six more Harvard alumni to the highest office in the land, more than any other college or university.

In this context, it’s worth considering what John Adams famously wrote about education in 1780:

ARs may notice that Adams does not mention medicine as a subject worth studying by any generation.  Considering the state of medical science at the time this omission is not surprising.  As I as a lawyer have often said, while lawyers were writing The U.S. Constitution, physicians were treating everything from acne to hemorrhoids to pneumonia to scurvy with bloodletting to relieve the body of “bad humours.”

I obviously have to admit that medicine has made immense strides since the days when leeches were regarded as a panacea and I have been a grateful beneficiary.  For the past three months I’ve been walking around with a titanium right hip, which is about to be joined by another titanium counterpart on the left side.  Among the few downsides to this procedure will be the post-surgery painkillers that will preclude drinking beer.

Luckily, there’s an appealing alternative that has been approved by some of the finest minds in modern medicine: non-alcoholic beer.  As some ARs have already read, Schlafly has recently entered into a joint venture with WellBeing Brewing Company, with whom we’ll be producing beers with lots of flavor but no added sugar and no alcohol.  Just in time for my post-surgery convalescence. 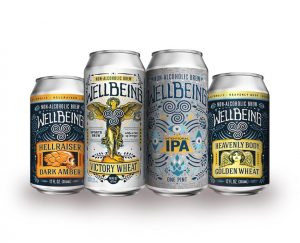 Just what the doctor ordered.

Apart from the failure to mention medicine as a worthy field of study, John Adams’s words are as apt today as when they were first written 242 years ago.  A prerequisite for any civilization is a functioning social order, the establishing of which Adams said required that he study “politics and war.”  Once political stability has been achieved, the next generation will be free to study “commerce and agriculture” and myriad other disciplines conducive to economic growth and the provision of essential food and shelter.   With a sound economy there will then be ample resources to support  “painting, poetry, music” and countless other arts that enrich our lives.

In this vein I’m proud to report that my cousin David Schlafly, who is also my business partner, has become the Chair of The Missouri Arts Council, whose mission includes promoting the arts in Missouri in multiple ways.  More information can be found at ABOUT – Missouri Arts Council.

In addition to David’s efforts Schlafly has been proud to support a variety arts ever since our inception.  One of the organizations in which I have been personally involved   is  The St. Louis Shakespeare Festival.  While the recent production of Much Ado About Nothing in Forest Park concluded at the end of June,   ARs and others can still see a production of A Midsummer Night’s Dream at one of 24 venues across the region during the month of August.  A schedule of performances can be found at A Midsummer Night’s Dream – St. Louis Shakespeare Festival (stlshakes.org).  ARs should note that the performance on Tuesday, August 16th will be at Schlafly Bottleworks.

Speaking of Shakespeare, The New York Times Book Review recently published an interview with the Australian-born, Pulitzer Prize-winning novelist Geraldine Brooks, whose books comprised a good deal of my COVID reading. When asked what book everyone should read before age 21, Brooks responded, “I taught writing at Harvard last year and half my students had never read a Shakespeare Play. That set my hair on fire.”

I think it’s safe to say with certainty that this would not have been the case in any class at Harvard in the 18th Century when John Adams or John Quincy Adams was there, especially not one devoted to writing.