In 1969 an article in Life magazine reported, “The counter culture has its sacraments in sex, drugs and rock.”  In 1971 the British magazine The Spectator wrote, “Not for nothing is the youth culture characterized by sex, drugs and rock ‘n’ roll.” In this context, as most alert readers (ARs) of a certain age will recall, the most famous celebration of this culture was a music festival that came to be known simply as Woodstock.    What most ARs probably do not realize is that Woodstock opened on the bicentennial of the birth of Napoleon Bonaparte.

I am not making this up.  Napoleon was born on the island of Corsica  exactly 200  years to the day before Woodstock opened on August 15, 1969. Consider the irony.  The concertgoers and organizers of a festival characterized by a distrust of authority and a fierce opposition to militarism and war were inadvertently celebrating the 200th birthday of a notorious militarist and imperialist.

Although Napoleon was initially a supporter of the French Revolution and its ideals of liberty, equality and brotherhood, he soon evolved into an autocrat who crushed democracy; crowned himself emperor; put his relatives on various thrones around Europe; and brutally conquered most of Europe, as well as parts of Africa and Asia. According to some estimates, the total number of military and civilian deaths in the Napoleonic Wars exceeded six million.  Not exactly in the spirit of Joan Baez and Country Joe and the Fish at Woodstock.

Following Napoleon’s defeat at The Battle of Waterloo in June of 1815, France was forced to give up all of the territory he had conquered but was allowed to keep hundreds of billions of dollars worth of art stolen by his armies.  I, like some ARs and others have seen some of this art on display at The Louvre and elsewhere.  Without purporting to be a knowledgeable connoisseur,  I can still say that I had a basic understanding of the stolen art I was viewing.  I could recognize paintings and sculptures and, in most cases, what they represented.  This was definitely not the case, however, with a celebrated work of art that recently sold for over $69 million.  I’m referring to Everydays: the First 5,000 Days, a non-fungible token (NFT) created by Beeple, aka Mike Winkelmann.  Full disclosure: despite having written the previous sentence, I can’t honestly say that i understand what the unnamed buyer of this work of art got for his, her or their money.  I’ve read and reread the descriptions of blockchain and crypto technology that supposedly help explain the purchase price and I still don’t get it. 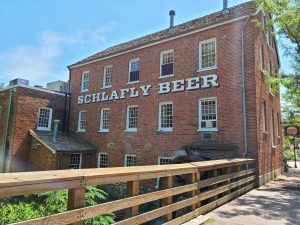 As old as Napoleon?

One contemporary commentator said of the sale, “NFT is definitely a revolution for our generation.”  Just as the parents of baby boomers may not have understood the revolution advocated by Jefferson Airplane at Woodstock in the iconic song “Volunteers,” I have to admit I feel like a Tory in the NFT revolution.

It has now been almost 52 years since Woodstock and in that time every single day has been the 200thanniversary of something that happened in Napoleon’s life.  In 1769, the year of Napoleon’s birth, the village of Les Petites Cotes (The Little Hills) was founded by Louis Blanchette, a French fur trader, who built a house alongside what is now Blanchette Creek in the City of St. Charles, Missouri.  The building that is now home to Schlafly Bankside was probably constructed on the foundation of Blanchette’s original house or another structure of similar vintage nearby.

In 1803 Napoleon sold St. Charles and the rest of The Louisiana Territory to The United States.  Because Napoleon would not crown himself Emperor until the following year, on December 2, 1804, St. Charles was technically never part of his Empire.  In the meantime, Lewis and Clark  had left St. Charles over six months earlier, on May 21, 1804.  By the time of Napoleon’s self-coronation in the Cathedral of Notre Dame in Paris, Lewis and Clark had already made their way to their winter camp at Fort Mandan, North Dakota, where the temperature got down to minus 40 degrees.  (As most ARs probably know, this is the point at which the Fahrenheit and Celsius scales converge.  So, the temperature was the same whether measured by the Napoleonic or the American system. Pretty damn cold either way.)

Napoleon died in exile on the island of St. Helena 200 years ago, on May 5, 1821.  Three months later, on August 10, 1821, Missouri became the 24th state of the Union.  The following year the first state capitol was located on Main Street in St. Charles a few blocks north of what is now Schlafly Bankside.

Napoleon’s widow, Marie Louise, who had declined to accompany him into exile, took up with the Comte de Neipperg, whom she married in 1821, the year of Missouri statehood. After Neipperg’s death she remarried again, this time to the Comte de Bombelles.

At least two of Napoleon’s former mistresses not only sought company elsewhere when he was exiled; they actually had affairs with Arthur Wellesley, the First Duke of Wellington, Napoleon’s longtime nemesis who defeated him at the Battle of  Waterloo. One was Giuseppina Grassini, an Italian opera singer.  The second was Marguerite Georges, a French actress who famously and indiscreetly announced to the world that Wellington’s performance in bed was de beaucoup le plus fort (much stronger) than that of Napoleon.  She was in a position to compare the sexual prowess of several world leaders at the time, having given birth to a daughter fathered by Tsar Alexander I of Russia.

It would appear that at least some of the spirit of Woodstock was alive and well in Europe two centuries ago.